It’s 6am and five or so diesel engines are emitting that distinctive idling noise. The diesel engines in the bellies of a fleet of safari-equipped 4WD’s are waiting at the gate to Uda Walawe National Park in the south of Sri Lanka, home to healthy population of elephants.

Safari vehicles are permitted between sun up and sun down which primarily occurs at 6am and 6pm, respectively, year round given the proximity to the earth’s equator. Well so I believe based on my limited knowledge of geography!

Uda Walawe National Park is over 100km long and 70km wide and is ring fenced by an electric fence which is turned on at 6pm each evening and switched off again at 6am with the aim of containing the animals within the park from disturbing the surrounding villages and farm land unexpectedly during the night. Those animals mostly being of the large nosed variety, in fact large everything! aka. Elephants.

So it was surprising when at 6:04am we arrived upon a large fully grown male elephant seemingly going through his morning routine of lowering the upper wire of this fence with his trunk and then manoeuvring his legs quite expertly over this wire to reach the rich green grass on the other side. Seems the elephants have cottoned on to the park rangers timings on the old electric fence! It’s fair to say Uda Walawe has a lot of elephants. And, with a lot of wide open plains you get to see a whole heap of them and up close too! Over three days of safaris we saw Elephants in all aspects of life. A whole herd having a swim and bath. A baby elephant bleeting for its mother. Even a male elephant with such long tusks they actually crossed at the end! Apparently a very rare sight.

Not to mention the birds. I was still amazed that every second tree seemed to have a peacock in it while our guide Roy was pointing out all manner of birds.

Spying these through the binoculars you get an appreciation to their exquisite beauty. Yet through the naked eye they blended with all the other birds zooming around the place. Then there were the large birds like eagles perched up high looking for prey. Buffaloes abounded, usually centred around the muddy ponds sharing this harmoniously with the crocodiles and an occasional egret perched upon their back picking at lice. Deer leaped through the grasslands in herds while jackals stalked in threes and fours along the fringes waiting for a young foal to fall behind.

The piste de resistance though was the leopard. One of the big cats lurking in the undergrowth. Roy explained they usually followed dry creek beds or could be found slouched on lower limbs of the more sturdier trees. We had our eyes peeled but with only a handful in the entire park it was going to be a rare spot even if they were within sight as they blend very well into the grasses which the buffalo and deer no doubt know all too well!

Apart from being focused on spotting wildlife it was just nice to take in the scenery. Plus Roy from Master Campers was a very informative guide, particularly on the birds! But was very eager and each time we went on safari was like a new experience for him when I imagine it must be one of hundreds of trips he’d do each year.

Master Campers had some tents outside the national park and was fully catered so you would class it as glamping. Especially on arriving back of an evening and there is a full pop up self serve bar at your disposal! Roy doubled as the chef who trained under a Swiss chef and knocked up some amazing dishes out the back of a small tent and a gas stove.

A trip to the elephant orphanage was worth the trip to see them at midday feeding. Still a bit disheartening to know there is a love/hate relationship between the elephants and the local townspeople. The elephants habitat getting ever smaller as farming and towns grow. The park is also likely to attract a growing number of visitors which could be a good or bad thing. A fine balance to keep it all on the straight and narrow. Hopefully these magnificent, intelligent (and hungry!) creatures are here for many years to come. Feeding time at the elephant orphanage

How to Climb Ella Rock in Sri Lanka
A drawcard of Ella, Sri Lanka is a hike up Ella Rock. Yet mysteriously no route map exists, no trail markings are present and the whole affair seems shrouded in...
98 Likes

Tomorrowland, Ella
It was with some trepidation that Erin and I left the safety of our traditional homestay in the main traveller's hub of Ella in the Sri Lankan hills. Aboard a small scooter, we...
82 Likes 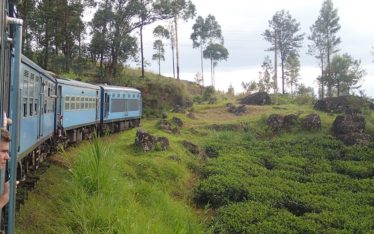