As far as mountain names go, Adam’s Peak is as simple as you get. Alongside Everest, the Matterhorn or Acongagua it seems quite plain. But this is Sri Lanka where the national dish is Curry & Rice! These Sri Lankan’s tell it how it is!

In fact, locally known as Sri Pada, Adam’s peak associates with many religious beliefs. All around a common belief that the footprint shaped mark at the top of the mountain was formed by some higher power. For Buddhists, it is where Buddha first set foot in Sri Lanka. For Christians and Muslims, it is where Adam stepped just prior to meeting the cunning Eve. And, for Hindu’s Shiva lay his foot here once upon a time. Question remains how the 4 religions can be all be right. But I think this is enough theology for one day.

Adam’s Peak attracts it’s fair share of pilgrims and on holy days Adam’s Peak is completely crammed when a 4 hour hike can turn into a 9 hour traffic jam particularly near the top. It also attracts a decent amount of tourists. For these reasons there are actually stairs all the way to the top and also lights. With a 6km hike covering over 1000 vertical metres this is quite a stairway to heaven! (I won’t be the first, nor the last to make that association).

Like many mountain peaks Adam’s peak is generally climbed in the early hours to make sunrise at the peak. So at 3am we find ourselves getting our gear ready and heading out the door of our guesthouse named Grand Adam’s Peak which actually had loads of useful information on the hike and what it entailed. The walk starts from the door of the guesthouse. After 3 minutes we made our first stop as an entrepreneurial local was selling trekking sticks for about $2 each. Might be handy on the 5000 stairs ahead of us both on the up and the down!

Looking up you could see the lights snaking to the summit which towards the top blended with the millions of stars. We were blessed with a clear morning. There were a scattering of other hikers. What was noticeable however were the local pilgrims, some descending, many with bare feet or just thongs. Some carrying babies, some quite elderly being helped by family members. What for us was a workout and a getting a good view was for many a true pilgrimage they may make just the once, or if they were in need of some divine intervention. 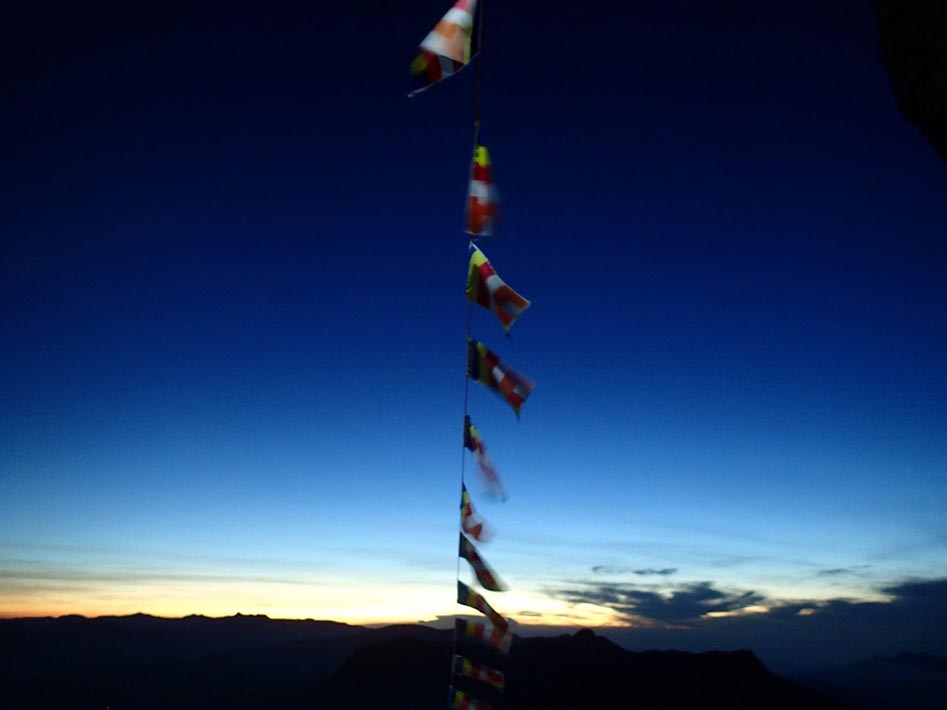 Now the stairs started in earnest and started to get steeper with every step. Little tea houses were dotted most of the way, selling snacks and water and attracted small groups to form on the trail. Focus now placed on each step as it got steeper and the pulse racing just that little more. Still very dark and sunrise was 6:15am we still had over an hour to the summit and wanted to avoid a long, freezing wait at the top.

Before long we were at a small police check just giving some advice for the top of the mountain where things can get hectic, particularly on holy days. We soon arrived at a building which was littered with people huddled in prime viewing positions for sunrise and prime shelter from the brisk wind blowing over the summit. We made out way to the shrine at the top where shoes had to come off and more pilgrims crowded in the dark quite possibly sitting in the actual footprint of both Buddha, Adam and Shiva.

A decision made quite swiftly by Erin to begin our descent so as to avoid the crowds all heading down after sunrise. Already the horizon was beginning to lighten with the first feint glows. A very good option as we now had an empty stairway below us allowing plenty of time for stopping to marvel at the changing colours of the sky as it brightened with the rising sun. What goes up must come down. Going down always harder on the legs. The town of Dalhousie, where our guesthouse was located, was visible in the distance and only slowly came in to focus. Eventually we came out to the road and a few kilometres to Grand Adams Peak guesthouse for a much needed shower and breakfast. With pilgrimage complete we could now continue our Sri Lankan adventure. Adams peak stairs in the daylight, but the stairs are quire well lit all the way to the top.

Hi, Warren! This is an amazing article! You`re a really good writer, bringing a magic to the reader like one was there. This also looks physically challenging. What would you recommend about some physical preparation before trails like this?

Hi Nigel, Adam’s Peak is a decent hike but also not too extreme. As it is a pilgrim trail you will see elderly people and children climbing the stairs (albeit slowly) to reach the temple. If you are moderately fit you should have no problem, there are concrete stairs all the way so the footing is quite good. My advice for training would be to find a long set of stairs, I find fire escapes in high rise buildings are perfect! Practice going up and down as coming down you’ll find is tougher on the knees. If you have any… Read more »

Thank you, Warren! I hope this will motivate more people to come on this adventure themselves, now that they can be sure it`s not that challenging as it sounds. Keep writing such great stories and bringing beautiful new trails to discover!

10 Smart Hiking Tips For Beginners
A successful hiking trip starts with a good plan. Hiking and backpacking are rewarding experiences, but it is only natural for beginners to find a hitch. Some experienced hikers will...
184 Likes

Faroe Islands Running Festival
On the home stretch, I was pretty stoked. The first trail marathon in many years. The Faroe Islands had to equal, if not surpass, the others in terms of scenery....
76 Likes
wpDiscuz
3
0
Would love your thoughts, please comment.x
()
x
| Reply