Walking in to Myanmar Border crossings these days have lost the romantic appeal of yesteryear.

Today you can drive across Europe, pass through 20 odd countries and never once get out your passport. Conversely take a flight from Kuala Lumpur to Colombo and you’ll have your passport checked 7-8 times in the space of 20 metres as you board the plane for no apparent reason. However doing a proper land border crossing in a remote and hostile location are now a bit difficult to encounter.

Which is why we are sitting here at Phu Nam Ron, Thailand enjoying our last supper before venturing into no-mans land. Phu Nam Ron is on the border with Myanmar (Burma) about 2 hours bus ride from the bridge over the river Kwai and is one of only 3 land border crossings into Myanmar.

Getting a visa is easy for Myanmar, if arriving by air into Yangon or Mandalay. You just get it on arrival. However arriving overland requires an application to the Myanmanese consulate in your home country (in our case, Australia) notifying them of chosen border crossing and arrival and departure dates before getting the necessary stamp in your passport.

Visa is the easy bit. Now back here in Phu Nam Ron we are taking refreshments before stamping out of Thailand. Passing through a small wire gate we walk onto the adjacent road and wander officially into no-mans land. The tarmac ends immediately and a dirt road winds into the hills which we are meant to follow for some 6kms to arrive in Myanmar.

Seeking a less arduous travel option, given we were laden with backpacks and it was a humid 35 degrees, we take to hitch hiking. We signal down one of the few vehicles passing through the boom gate at the border. Eventually a man in a white sedan stops briefly and we explain, badly, what we need. Using the language barrier to our advantage we hop in and see if there is any complaint. Seemingly OK, he looks more shocked than happy to see us in his car.

Bouncing along the road we eventually come to another boom gate at the allotted 6km mark. About 30 meters before this our driver stops and looks at us and says something I interpret as ‘Get out’. In fact An Arnold Schwarzenegger impersonation would have gone nicely here. Our driver obviously not wanting to be responsible for bringing us and our luggage through the border should it contain any contraband.

So we walk to the boom gate at the border addressing a soldier holding an automatic rifle.

‘Where are you going?’ he asks.

‘Dawei’ we reply. Dawei being the next town of note on this side of the border.

‘Where are you from?’

He smiles and raises the boom gate and directs us through. It was like we got the password right on a game of Amazing Race. We now enter a dusty frontier town with some ramshackle buildings on a hill leading down a dirt road to more ramshackle buildings and lean to’s scattered haphazardly over a wide dusty field.

One of these ramshackle buildings apparently held the immigration office which was required to stamp us in to Myanmar. No instruction to his effect just that having acquired a visa we felt we ought to show it to someone. We eventually located the office on the lower area of town. A young border official greeted us at a plastic table and chair setting. He had in front of him a very large ledger like a bookkeeper from the early 1900’s. He meticulously penned our details into his ledger in the next available space. We were in!

Our onward journey to Dawei was about 5 hours away on a dirt road following a river. No buses travelled this route so a driver needed to be sourced who was up for the task. Asking around we eventually woke a man who seemed keen after negotiating a price. He also had a large van with air conditioning as an added bonus.

Before leaving ‘Frontier town’ our driver did his rounds offering now discounted seats to locals who were keen to travel on the ‘Frontier town’ to Dawei route given that it was, we expect, predominantly funded by us gringos. Only 3 or 4 people boarded with a small child and once again we were off.

A slow old journey on a rocky road. Our driver munching on the popular beetle leaf. Gums and teeth red and rotten from years chewing these addictive leaves. We passed 3 or 4 more police checks. Each time we were the focus of the army officials enquiries. But each time we were waved on.

We arrive into Dawei just as the sun is going down. A drive from ATM to ATM to find one that works in order to pay the driver and then arrive at the Diamond Crown Hotel where I think we were the first foreign visitors to stay in some time as our hapless (I mean that affectionately) porters fell over themselves in order to be at our service.

We walked out into the night and the dusty streets made extra dusty with motorbikes zooming all about. We had quite a few curious stares from locals as they truly do not get many foreign visitors to these parts. Found a nice restaurant with a well groomed lawn and enjoyed a decent meal on our first foray into Burma, now known as Myanmar. 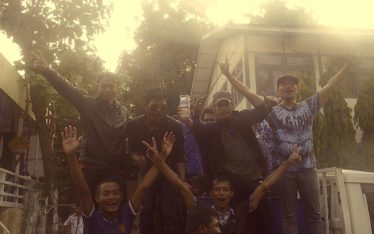 A Burmese Baptism
I'd never missed a flight before. This was not a record I was tracking closely or even particularly proud of. I supposed it was something of an achievement. Not a...
42 Likes
wpDiscuz
0
0
Would love your thoughts, please comment.x
()
x
| Reply