Room with a view of Kinabalu Doing business in Borneo is a peculiar affair. Our hire car was acquired by meeting a man outside a supermarket in Kota Kinabalu. Our campground was found by visiting a laundromat in Poring Springs. So we weren’t too surprised when our planned stay in Kinabalu Holiday Camp Hotel involved first meeting a man named Oliver outside of the local Maybank branch in Ranau.

Having summited Mount Kinabalu that same day we’d been up since 2am, and spent the previous 2 days camping in the jungle so were very focused on chilling out for the afternoon. Ranau was dry and hot and Oliver seemed delayed. So when an old sedan eventually rolled up to the Maybank branch door, I was very glad when he introduced himself to us as Oliver.

Oliver began explaining the Kinabalu Holiday Camp Hotel as his own enterprise and he was in the process of setting it up. It was quite a way from Ranau so he normally met most guests in town and escorted them to the ‘Camp’ or was it a ‘Hotel’? We could have been excused for being confused!

The one thing we were certain about was we needed to self cater our meals. So we’d need to pick up supplies in town before setting off. We scoured the town for some staple ingredients for a nightly meal. Foraging between depleted markets and chaotic and confusing supermarkets. Lastly, trying to secure both rice and ice from a restaurant was necessary as these were not available in a single one meal portions in any store. Many gestures later the restaurant came through with the goods, and even a few cold Tiger beers!

With the larder suitably stocked we tailed Oliver into the hills. Our final destination unknown. Speculation was rife as to what we would find at Oliver’s place. This speculation got more fanciful when more pieces of the puzzle fell into place. Firstly, the bitumen ended leaving a rough corrugated fire trail. Secondly, all signs of civilisation ended with the few visible buildings being burnt out and long since vacated. The third and final sign that sent the senses reeling was a locked gate we passed through. This was accompanied by a sign written only in Malay but with an ominous skull and cross bones icon at the end. Oliver was careful to lock the gate behind us as we continued on.

So where in the actual fact were we exactly? A few more twisting turns on a desolate road and we were to find out. We arrived at another locked gate. Although this time there was what we understood to be Oliver’s place. There were 5 rather neat steep roofed huts lined up in a row connected by a thin raised walkway. These huts were reached by another thin walkway spanning a swampy moat. The backdrop to these huts was probably the most spectacular view you are likely to get of Mount Kinabalu anywhere. This is coming from us who were only on the summit of the mountain that morning.

Oliver had followed the first rule of real estate being location, location location! Or perhaps the not so well known rule as ‘Build it and they will come.’ Either way it was a unique setup and needless to say we were the only guests for the evening. Our assessment would have to take a back seat for now as we were desperate to eat. Oliver cleared out the ramshackle, yet functional outdoor kitchen so we could prepare what turned out to be a decent meal and a well deserved beer admiring Oliver’s chosen location. We were joined by a cute family of cats for dinner meowing in chorus.

Oliver was keen to show us around the area so we agreed for a morning tour given we’d done our hiking for the day. We bunked down in one of the bungalows just as the rain began to fall, then shifting one cabin over as ours had sprung a small leak. Assured, just teething issues…

Waking up to Kinabalu

It was still dark. A deep restful sleep had been had. The kind where you forget where you actually are. Heavy footsteps were coming towards us along a wooden walkway, then stopped at our door. ‘We must go now’ came a voice.

Oliver was making good on his promise for a sunrise tour of his surrounds. Oliver taking us on his morning walking tour.

We hiked up a steep but wide trail and came to overlook an impressive lake cut into the mountain. The sun had just risen and glinted off the surface in a perfect morning light. Oliver was quite the conversationalist and described how he had secured the land and saw the potential. This disused copper mine could soon become a major development however Oliver was keen to keep it for Eco Tourism and sustainability. He realised it was still a long shot and realistically the area would take some time to regenerate. We continued higher to a small plateau which had even better views. A 360 degree view in fact with Kinabalu and the lower laying plains all in view in the sunrise. Oliver had plans to build more huts on this plateau given the exquisite views. For now though there was a promotional job to do to get more than two travellers at a time to his holiday camp. Time would tell, yet we were privileged to be some of his first guests and take in the fine views and hear Oliver’s ambitious plans for the future. We wish him all the best! View down the valley away from Kinabalu.

It’s best getting in touch with Oliver directly via email: [email protected]

Oliver will meet you in Ranau and escort you the 30 minute drive to the camp.

See Oliver’s virtual tour at his own video below: 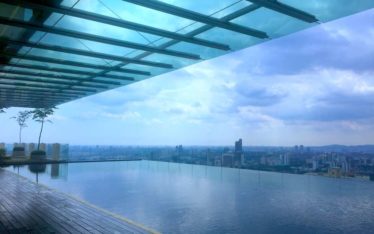 Balinese Visa Run
With Bali a growing destination for expat and digital nomads, co-working spaces have sprung up, wifi has improved, so too has the coffee. One thing that is unchanged however is...
54 Likes 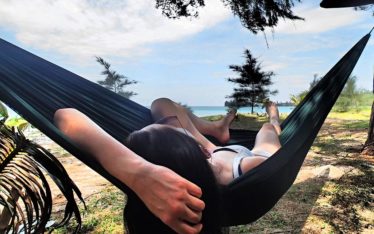 Kudat Turtle Beach Sanctuary
Finding a truly deserted beach to camp on these days is a pretty tough find. So, by the time we were sitting back in our camping hammocks, with a beer...
42 Likes 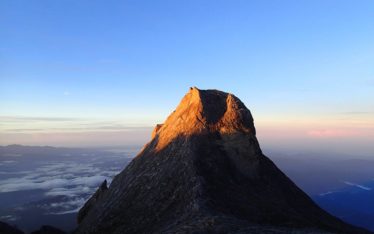 Hiking Mount Kinabalu, Borneo
Mount Kinabalu is the highest mountain on the island of Borneo. Kinabalu stands at 4095m above sea level and is reported as a two day hike to the summit of...
47 Likes
wpDiscuz
0
0
Would love your thoughts, please comment.x
()
x
| Reply