From Volcanos to Villages & Waterfalls 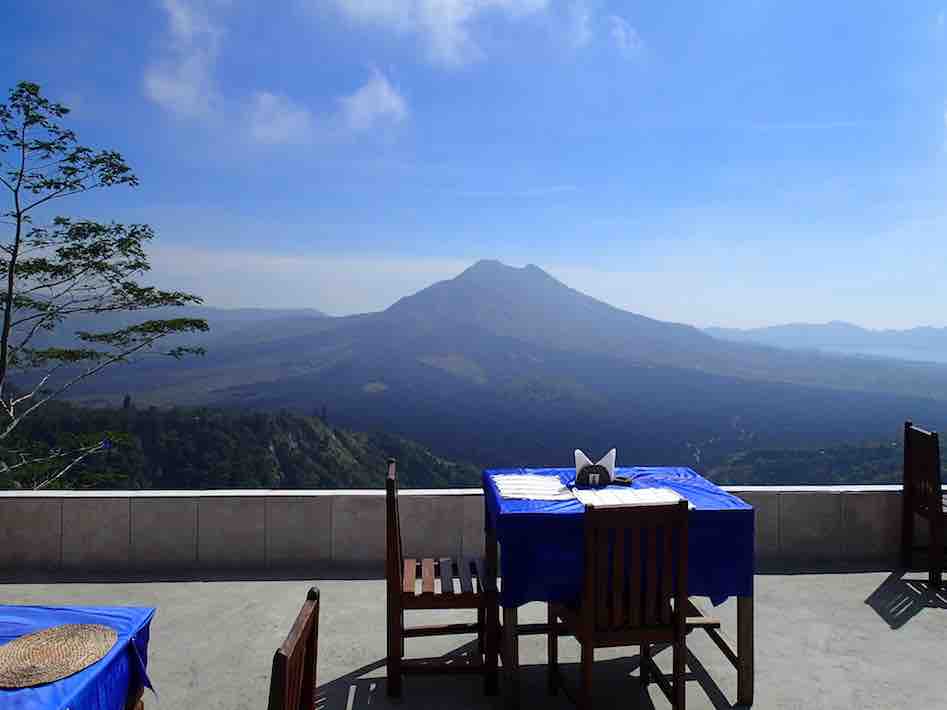 There is nothing that says adventure more than cycling down an active volcano. An overblown imagination might conceive visions of racing rivers of lava down the mountain. Yet, with reports now of Mt Agung looking to blow its top, our recent mountain biking adventure down it’s next door neighbour Mt Bakur could have been closer to a fiction-meets-reality moment!

Heading out for Erin’s birthday our group of five signed on with Sepeda Bali based out of Ubud. Brothers Wayan and Ketut have been running their cycle trips for 5 years and turned their custom routes down the mountain from something they shared with friends to a commercial operation. Ketut met us at the villa at a respectable 8am and we headed up into the hills.

Breakfast was had in the shadow of the volcanic Mt Bakur. Volcanos are common place in Indonesia, in fact Indonesia has around 120 active volcanos, the most of any nation in the world. We could see the remnants of a 1968 eruption while enjoying a delicious  omelette on the terrace. The solidified lava in much the same state it has been for 50 years. A small island of greenery was visible having survived the lava flow all those years ago.

Just before arriving at the trailhead Ketut pulled over on the side of the road for a blessing. A small dab of rice on each of our foreheads and a traditional balinese offering was placed on our dashboard. As Ketut said “To keep us safe on the mountain”. There was no ceremony or staged event, it was just a simple ritual done in the course of the day.

We met Wayan and the bike handlers on the edge of a track in the forest. We got sized up and took our trusty steeds for a test run. For a few, including myself, it was a little while between pedals. Starting on arguably the trickiest terrain of the day meant for a few skids and mishaps in the sandy soil until we got into the rhythm of the ride. Getting kitted out by Sepeda handlers for our downhill journey.

First stop was at a small modest open shed across the road from a temple. A few people were sitting around carving bamboo into the wind chimes that can be found in the various markets about town. It was impressive how easily a perfect notch was carved out of a stick of a bamboo to create identical wind chime shapes each and every time.

We sped down small roads and dirt tracks which continued onwards and downwards, hardly an uphill to be had! Neighbourhood dogs would often poke their nose out of their homes for a sniff or a bark if they were feeling particularly game. You could smell the scents from the trees or cooking from the villages as the wind kept our skin cool from the heat of the midday sun. Future wind chimes, carved precisely and efficiently in a small shed in the hills.

We reached a Balinese family compound for a snack. The compounds that Balinese live in are always an impressive sight. Their size, ornate craftsmanship of both wood and stone and distinct layout offers a very homely and secure place. A fruit platter was waiting in one of the open huts. We enjoyed the tangy goodness of the local passionfruit, the scaly snake fruit which tastes like a tougher form of lychee, some baby bananas and a freshly shucked coconut. It was a good midway snack in the shade of the compound.

Next we entered more of a single track which went between forests and villages. The local children treated us like celebrities as we zoomed past. Waving madly and screaming ‘Hello!’ at the top of their lungs with some reaching out for high fives.  Tourists are still a novelty in these routes which are unique Sepeda Bali. Mountain biking is popular on Bali and Ketut and Wayan keep the trails a closely guarded secret and working with the villages for unique access to prevent the overuse.

Towards the end and after a good 25km we arrived at the Tukad Cepung Waterfall. We exchanged bikes for hiking shoes and headed down the steep stairs  following the rice paddy irrigation canals to a deep canyon. A steeper set of slippery muddy stairs led to the canyon floor. Following a river upstream we found ourselves at the opening to a mighty waterfall. It was possible to wade right up and stand under the torrent of refreshingly cool water. Cooling off at Tukad Cepung Waterfall

Our final stop was at Ketut and Wayan’s family compound. Ketut’s wife had jasmine scented towels soaked in ice water ready and waiting along with a home-cooked buffet lunch, something we weren’t expecting but dug into nonetheless! We even squeezed in a desert! Sepeda Bali specialise in small groups and there was only one other group out that day, so 8 cyclist in total and it was a lot nicer than being in a group of 30 or more which we had witnessed on our drive up the mountain. Lunch at Wayan and Ketut’s home

Time will tell if Mt Agung erupts and to what degree. The uncertainty alone will have an impact on the villages and businesses in the line of fire of Mt Agung who have the potential of losing everything. So we hope many more get to do the mountain biking down Mt Agung and surrounding areas soon and that the disruption is kept to a minimum.

Nasi Goreng Tour of Bali
Nasi Goreng, the unofficial national dish of Indonesia. This ubiquitous item appears on menus from Jakarta to Denpasar. While 'fried rice' is the literal translation, this simple dish combines many...
150 Likes

Top 5 Ubud Eats
With more restaurants in Ubud than you can poke a pair of chopsticks at, the choices soon become overwhelming. We've narrowed down our top 5 Ubud Eats to make the...
134 Likes

Bali Bohemia: Live Music and Cool Vibes
Connecting people through the appreciation of art and music. If you are looking to get off the beaten tourist path in busy Ubud, you need to venture across to the...
130 Likes
wpDiscuz
0
0
Would love your thoughts, please comment.x
()
x
| Reply