It was a bleak Christmas Day’s evening in the far south of Chile. Celebrations on this day were mild with Christmas Eve being the main celebratory event. We stood outside the vacant NaviMag offices at the small marina of Puerto Natales. The almost perpetual sunlight for this time of year still beamed brightly through the clouds. The sun’s warmth was whisked away by a strong southerly sea breeze carrying the frigid Antarctic temperatures with it.

We had just arrived for our passage on the NaviMag, a 4-day journey in a cargo ship north to Puerto Montt through the Chilean fjords. On a map, this is the remote fractured southern tip of South America. It resembles a sea of icebergs that have been cast off from the mainland. Most of these iceberg-like islands are uninhabited by humans although penguins, sea-birds and seals find refuge here after many days at sea.

We were trading in our usual accommodations, moving from the back of our campervan to a cabin on board the NaviMag. Still, our campervan was coming with us, it was to be stowed well below decks in the NaviMag cargo hold. You see, driving in the south of Chile is often interrupted by impassable rivers, lakes and glaciers. In fact, reaching this far south by vehicle requires one to exit Chile altogether and use the dry deserts of Argentina as the route south. So it was to avoid backtracking some 3000km of desert highway that led to this unique opportunity to travel north via the remote Chilean fjords. Sunset on Christmas Day in Puerto Natales aboard the NaviMag.

Getting ourselves and our trusty Toyota 4Runner onboard the NaviMag took some doing. NaviMag themselves are somewhat unresponsive and online bookings only cater for passengers, sans vehicles. Using TravelAid Pucon we were able to secure tickets for us and our vehicle quite successfully. Still, the logistics of where to board, how to board and what to expect on board were very vague.

The ferry departed at 6 am on 26 December, yet all passenger were needed on board by 9 pm the day prior to departure. The NaviMag office at the port was closed and a boom gate operator signalled that we needed to check into customs first. The fact that we were not leaving Chile was lost in translation so we were again left with a difficult interaction with the local Aduana officials who never seem to let you do anything out of the ordinary! Turns out the state of Magellanes (in which Puerto Natales resides) is a bit of Chilean tax haven meaning anything significant (like a car) heading back to mainstream Chile needs to be checked.

After some solid negotiations, we had passed gate #1 and were on to gate #2 where we had 2 options:

We chose the latter, with a bit of blind hope that the car would accompany us to Puerto Montt! The NaviMag is a rough and ready cargo ship. It is comfortable but not luxurious. Come for the scenery!

Taking what we needed from our car for 4 nights aboard the ship we were issued our keys to cabin #613. The interior of the NaviMag had a spartan and dank feel to it, much like a prison. Our cabin consisted of two bunks, a cupboard and a sink much like a cell. Our ‘cellmates’ Liz and Jeff were from the USA. They had been ‘sentenced’ to the NaviMag after a 6-month jaunt through South America including most recently, like us, Torres Del Paine.

The NaviMag doesn’t boast to be a cruise ship. It is a cargo ship that has begun taking passengers on its unique and remote route. As such it doesn’t promise anything other than food and board. Sleeping options including dormitory style beds in open hallways, 4 cabin rooms (such as ours) with shared bathroom and double rooms with an ensuite. Prices range from $400-550 for the 4-night journey including 3 square meals a day. 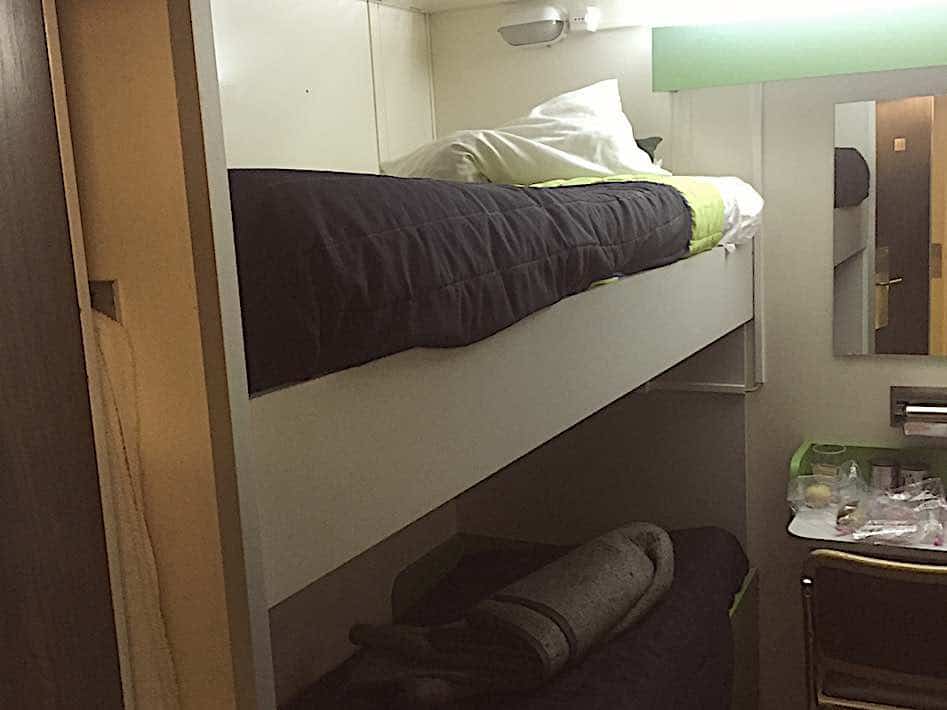 Welcome to our cramped and hot quarters for the journey on the NaviMag. Until we got upgraded to the double suite of course!

Our ship was actually named the Ferry Eden a 15 tonne, 136-metre long cargo ship built in 1984. It had two decks with rooms for 40 odd passengers and crew, the rest was cargo. It was one of two ships doing this route on behalf of NaviMag. Three staff were assigned to assist the passengers including Percy, an enthusiastic naturalist who was keen to show off his native Chile, this region in particular and its wildlife. Presentations were done in both English and Spanish fluently with many other languages, it seems, were spoken upon request. Braving the fierce freezing early morning winds on the front viewing deck of the NaviMag.

We were awoken at 7 am by Percy on the loudspeaker, which is piped into each cabin. Having set sail during the night we were now leaving Golfo Almirante Montt and heading into the long narrow channels on our way out to sea. At one particular point, it was not much wider than our 23-metre wide ship. So Percy wished us all to join him on the front deck to witness either some skilled maritime navigation or the final moments of the Ferry Eden! Navigating the narrow channels aboard the NaviMag

Luckily, we passed through the channel with room to spare and just in time for breakfast. All meals were a buffet style affair held in two sittings. Odd numbered rooms first followed by even number rooms second. The sittings were switched between groups at successive meal times. Meals were plentiful with staff on hand to dole out the helpings of the main course. Very American school cafeteria style and kept in theme with the cargo ship style prison we were now ‘captive’ on for the next 4 days. A sample of a meal aboard the NaviMag. Not short on quantity and you can always go back for seconds. And yes, that is a chocolate mousse in the top right corner!

Our breakfast discussion turned towards the unbearable heat of our cabin the previous evening. We were positioned near the engine room making the heat in our room just below boiling point. We opened the door during the night but this provided only a small relief. With no way to adjust the heating or cooling at all, we went in search of some makeshift options. An empty double with an ensuite room was eventually discovered and acquired. We then alternated nights with our roommates Liz and Jeff. The upgrade to the double room (albeit two single beds) with ensuite.

The NaviMag is a dry ship, meaning no alcohol is served or allowed to be consumed on board. On previous voyages, some drunk truck drivers started a fire and an inebriated woman fell overboard. So alcohol is now not permitted. Yet, of an evening you see many a passenger nursing a suspicious coffee cup or even a group of travellers drinking from a bottle of apple juice into the wee hours. We ourselves spent many hours in our cell of a night playing card games with our cellmates over a few cups of local grape juice. Staff turn a blind eye, but safety is the main reason they don’t want the NaviMag to be an all-night party boat.

Picture this. You are one of 176, mostly native Kawéshkar people living in the most remote location in Chile and in one of the wettest places on earth. You mostly fish or farm mussels for food or trade and the once a week NaviMag ferry, arriving at 4 am, is your only connection to the wider world. Unfortunately, passengers are not allowed off in Puerto Eden, unless you wish to stay the week of course. Islands run mostly uninhabited, and windswept like this one, throughout the Chilean Fjords

Despite the very volatile and often miserable weather preventing wildlife spotting, the indefatigable Percy ran flora and fauna lectures on the area. They contained quite a lot of information to absorb, particularly the birdlife including the wandering albatross the largest of the species with a 4-metre wingspan. This along with movies, reading, chatting with other passengers and let’s face it, sleeping, it was quite a relaxing 4-day sentence! The daily menu and schedule provided each day on the NaviMag.

On the final full day of sailing the weather cleared in an area just south known for humpback and killer whale spotting. As passengers, we were allowed into the captain’s bridge walking among all the instruments and charting equipment and also have the best viewing position for the whales. Learning the finer points of navigating a cargo ship in the Captain’s bridge.

Only a few distant whale spouts were visible however we got more than one visit from the curious albatross. It would swoop in and follow the ship just off the side railing for a number of minutes before taking a nose dive and skirting only a few centimetres above the water using the wind and its wings like a sailboat tacking into the strong breeze. It was quite mesmerising to watch. 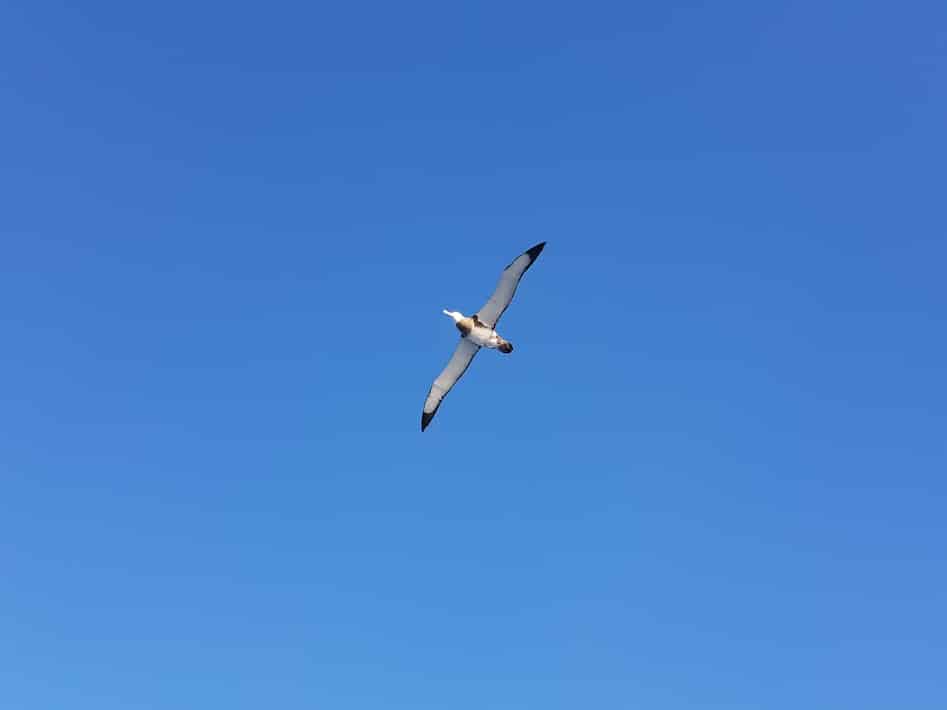 The wandering albatross with a 4m wingspan. NaviMag provides plenty of information via Percy the energetic naturalist aboard.

After 4 nights at sea, it was an early morning arrival into a rainy and windswept Puerto Montt. Overnight, all the cargo had been unloaded, including our vehicle which was taken to a nearby parking lot. With Puerto Montt not the safest of places we were keen to get reacquainted with our campervan as soon as possible. Regular passengers were transferred to the bus station in Puerto Montt while we took a short car ride with a fellow couple to the lot to pick up our respective cars. Our battery was flat although it could have been our electrics at fault rather than anything NaviMag did.

Looking to Sail on the NaviMag?

The NaviMag is definitely a worthwhile adventure whether you have a vehicle or not. The meals are plentiful and despite online comments about them being a bit bland I guess don’t get onboard expecting fine dining. You definitely won’t go hungry which is the main thing. Rooms can get hot as described depending on the location. The staff are quite willing to shift passengers around even into rooms above the class you have booked, but all are again quite basic. If you wish to experience this remote corner of the world it is likely the only way you will see it unless you charter a yacht yourself. So the NaviMag is definitely an affordable and straightforward way to travel around the Chilean fjords and avoid a lengthy and messy overland trip north.

no worries Abdul – if need any more assistance let me know