Climbing One of chile's Most Active Volcanos Volcan Villarrica dominates the skyline when seen from the Ruta 5 heading south through the Lake District of Chile. The symmetrical snow-capped conical peak soars high above any surrounding landmarks. Plumes of smoke chuff from the top like a boiling kettle which makes it an impressive photo opportunity from the road side. Little did we know then that things would get a lot more intimate with this active stratovolcano in the coming days.

Erin and I were less than a week into our Chilean road trip. Having got our Toyota 4Runner setup for a 3-month road trip over the first few days, we were now embarking on the adventure proper. Our planning thus far had been done in real-time given we only decided to visit Chile a week before we arrived. In fact, we had only just finished reading the relevant chapter in our guidebook as we pulled into our chosen campground, just a few blocks from the main street of Pucon.

Pucon is the adventure capital of Chile, much like Queenstown is to New Zealand. Walking up the main street of O’Higgins it oozed adventure.  Outdoor stores, tour companies, bars and restaurants occupied most of the real estate, each all ramping up for the upcoming summer season. Looming over it all though was the dominating and imposing Volcan Villarrica.

We set about getting a cleansing ale with volcano views after our long drive. A stroll past the window of an adventure tour office revealed a video on loop. It pictured a group of hikers standing on the lip of a steaming volcano. On closer inspection, this happened to be the one and only Volcan Villarrica we had been fixated on all afternoon. People actually climbed this behemoth!

Volcan Villarica is 2860m above sea level and located behind its namesake town Villarrica within the Los Lagos region of central Chile. Volcan Villarrica last erupted in earnest in 2015 and the adjoining towns of both Pucon and Villarrica were evacuated. It is considered one of Chile’s most active volcanos. Despite this fact we were to learn that over 20,000 people each year make and ascent of the volcano. The imposing Volcan villarrica as seen from the streets of Pucon.

Deciding whether or not to climb an active volcano

The question hung silently in the air as to whether we were to attempt this sizeable challenge. The lactic acid had only recently left our legs from the hike up Enladrillado a few days earlier. With no fixed itinerary just yet, no must do lists or plans otherwise, it came time to commit to something to begin our adventure in earnest. With a mix of anxious excitement, we agreed, why the hell not!

Luckily, we were able to snare the last two spots on the next day’s climb. Time to take stock. It was currently 7:30pm, in less than 12 hours we’d begin our ascent! We were fitted out that evening with mountaineering boots and other essential gear. Then packed our own supplies back at the campground. Oh, and we needed to notify Carlos at the campground that we’d be staying una mas noche!

An uncivilised 5am alarm the next morning was a bit of a rude awakening. We entered the tour office right on 6:30am and joined the buzz of fellow hikers getting acquainted with their gear. This gear included waterproofs, gloves, crampons (for gripping icy sections), gas mask (for near the smoky summit) and a plastic slide for the descent! A slightly unorthodox descent but, but just quietly, this part was what appealed to us the most!

About 15 of us were crammed into a mini-bus for the drive to the base of the volcano. The road rose steeply from town and stopped where the snow began to cover the road. A short briefing was received from lead guide Matias before we were each handed an ice axe completing our mountaineering ensemble. We now stood at 1200m. The angry smoking summit in the distance stood at 2860m, in short, we had a long day ahead of us.

We had read, in the few waking hours since booking the climb, that a chairlift was available for the first 500m of altitude gain. It was recommended to take this option given the strict 4-hour time limit on reaching the summit. As we approached the chairlift there didn’t seem to be much of an option on this occasion as the chairlift wasn’t even running. We’ll have to climb the whole 1660m under our own steam. It was now 8:30am, we had to be returning from the summit no later than 1pm. Vamos!

We began our march of the penguin’s, zig-zagging in single file behind the lead guide Matias, with other guides interspersed in-between. The ankle-deep snow was crisp with already clear foot holes from the few other tour groups ahead of us. It felt all quite civilised until we crested a ridge and the wind howled down the mountain so loud it made conversation difficult.

Our first 10-minute rest stop came after an hour and a half. It was 10am, just over two hours remained to reach the summit. Wafts of acrid sulphur gas were already stinging the backs of our throats as we sucked in the thinning air. Plumes of smoke could be clearly seen coming out of the crater and these cast menacing dark and dirty shadows across the clean white snow of the mountain.

The second rest stop. Another 10 minutes respite. It was now 11am. The monotonous switchbacks were beginning to take their toll. We were in the lead group, not due to being supremely fit but mostly in an effort to keep up with Matias the only English-speaking guide. By now though more than half the group had already dropped back. The volcano seemed to simply laugh at our struggles by bellowing out more smoke than was usual. The ice-axe now came in to regular play, stabbed into the ice at each step to ensure a firm grip on the mountain. The never ending march of the penguins up the steepening ice slope.

Nearly 45 minutes later we were at 2500m and nearing our final rest stop. The views of the surrounding landscape was dramatic. Previous peaks we once looked up at from the campground we now looked down on as small humps, the vast Andes mountain range could also be seen stretching north. Barely time to take this in we were now told to put our gas masks on. I would have happily put it on earlier but now we were in constant wafts of sulphur clouds. Both Erin and I had some issues getting our masks to work as no air was really getting through. After a few adjustments, it seemed to be better but the effort to breathe through the mask made what was already difficult breathing a lot harder. We eventually perched on the false summit about 50 vertical metres below actual the rim of the volcano. We were told to leave our bags of gear behind and take only the gas masks and ice axe. The snow was very icy now meaning a slip would mean a long slide down the unending face of the mountain. The only thing to be heard over the intensifying wind was the frequent thunderous booms from within the crater. Shit was getting real!

The ground turned a slushy black near the summit with volcanic rock splattered throughout the snow. We had arrived at the icy rim of the crater; the summit celebrations would have to wait as the wind was nearly blowing us over. The guides edged closer to the rim and beckoned us to join them a few at a time. I saw no need to get any closer, no ropes or natural barriers would prevent us falling into a very active volcano, a certain death sentence. Just then the crater roared and hissed out another huge intoxicating charge of gas and smoke. The culprit for all this mayhem could now be seen, a fiery molten vent resembling a huge blowtorch, blasting furiously from way down in depths of the crater. 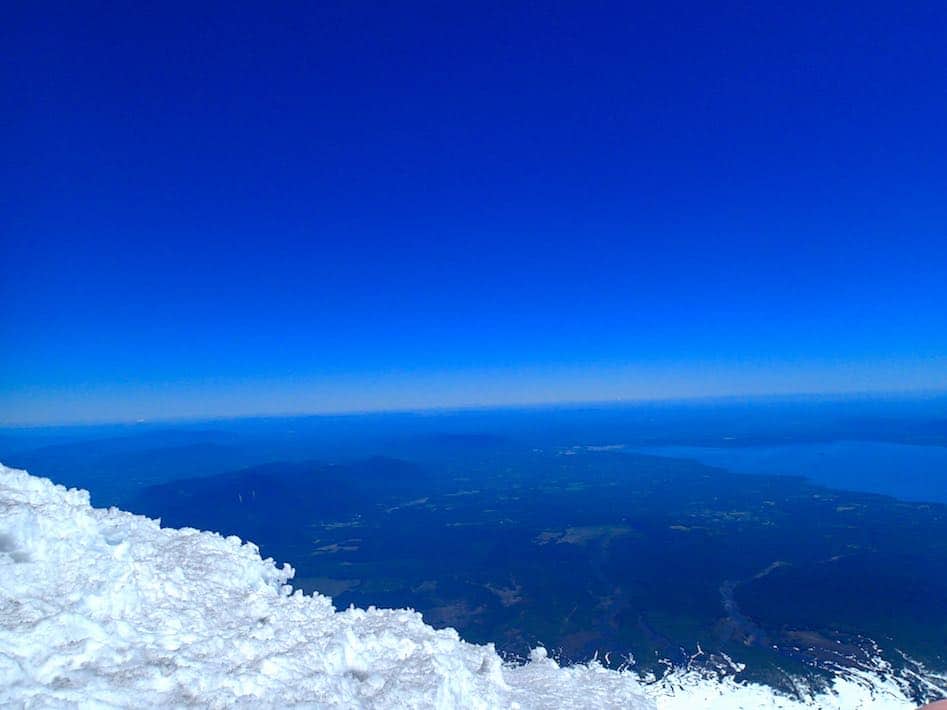 What the 2860m summit of Villarrica looks like above Pucon.

Descending a volcano on a bobsled

Having had our fill, heading down quickly seemed the most logical next thing to do. Below the summit we put on all our waterproof gear and tied the small round plastic sled to our waists and tucked it between our legs. With feet first, legs together and knees bent we slid down a pre-grooved chute in the snow using our ice axe as a brake. It was difficult to control, particularly on the upper section and being fatigued from the climb didn’t help with concentrating on the job at hand either!

The first two chutes were very precarious and my brake system seemed faulty. This became easier as the slopes got less steep, eventually it was like one long windy water slide over 2km in length! Erin enjoyed an assisted descent with the guide which gave her more control but a lot of extra speed! I could not keep up so I slid merrily down the hill enjoying the relief of leaving such a hostile summit.

The summit of Volcan Villarrica was as challenging as it was terrifying. It may be a while before we climb an active volcano again. It was beautiful in its ferocity and a reminder what power our earth holds beneath its thin surface. A few weeks after our ascent the warning levels on Villarrica were raised once again. We were privileged to get so close to a unique and dangerous place, even though we did not feel Volcan Villarrica necessarily rolled out the welcome mat.

I’m not certain a climb on Volcan Villarrica is all that safe, on many levels. While our guides seemed very competent and undertake the climb nearly every day, there have been some locals and also tourists die whilst climbing it. I’d recommend doing your research and quiz the tour company to see if you are up for it, or feel free to get in touch with us. The climb was worth the slide back down that’s for sure!

10 Smart Hiking Tips For Beginners
A successful hiking trip starts with a good plan. Hiking and backpacking are rewarding experiences, but it is only natural for beginners to find a hitch. Some experienced hikers will...
184 Likes

Faroe Islands Running Festival
On the home stretch, I was pretty stoked. The first trail marathon in many years. The Faroe Islands had to equal, if not surpass, the others in terms of scenery....
76 Likes
wpDiscuz
0
0
Would love your thoughts, please comment.x
()
x
| Reply