So we decide we need to keep moving on our Central American trip. With no itinerary it was difficult to leave  Tulum . It was a great spot to get assimilated into Central American life. Our next destination was unknown. South is about the only guide we gave ourselves. Panama being as far as we can go overland. In between we’ll go wherever the chicken bus may take us! The chicken bus was currently taking us to Belize city via Chetumal.

We arrived after 3 hours from Tulum into Chetumal at precisely 1:58pm with the Belize city bus leaving at 2pm. Although we were learning one good thing about the chicken bus, is it is always after another passenger so we were confident of making the connection. Still it was a mad rush for tickets, some food and water and making sure the bags were secured on the roof of the bus.

Soon enough we were at the Belize border and became acquainted with two German girls and a Canadian guy while we did the border formalities. A few other travellers on board but these guys looked to be having the most fun.

Back on board and it wasn’t until dark that we arrived in Belize City. Not the most hospitable of places according to the Lonely Planet although we had to spend one night in town before potentially heading out to the more hospitable and popular islands a short way off the Caribbean coast. Belize is a stark contrast to Mexico with a more African/Jamacian feel and English being mostly spoken.

Out of the bus terminal we move into the throng of waiting taxi drivers. Always a daunting prospect of picking a driver who looks trustworthy and actually is trustworthy. Being night time just adds a little to the occasion. I spy a particular guy in the crowd and gut instinct said to go with him. In reality they would all have likely been fine but you get to pick the kind faces versus the desperate, indifferent, aggressive or mean. This guy was pleasant and dropped us at the recommended Belcove Hotel. We were in a rush as accommodation was bound to be busy in lead up to a weekend. Plus a bus load of travellers all carrying the same Central America book heading to likely the same place could mean a long uncertain taxi ride about town looking for a decent place to stay.

We did well and it seemed ‘We were the first to arrive’ in the way of Amazing Race. We found a decent double room, dumped our bags and went to the adjacent restaurant to grab some dinner.

Soon after we were joined by the three people from the bus mentioned earlier. Laughing as they came into the restaurant as they had to share a room between the three of them given the limited rooms available. They joined us for dinner. There was a Canadian guy Sean with two German girls, Martina and Juli. The restaurant was situated just above the water with the river or bay leading into Belize city.

Some good conversation followed and like us they were headed to Caye Caulker the next day so we agreed to meet for the same boat the next day.

Up early for boat ride out to Caye Caulker, an island in the Caribbean which was an hour speed boat ride from Belize City. Speed is correct with two 200cc outboard motors pushing about 30 passengers in a wooden speedboat. Driven by a boy about 15 years old.

Arrive safely and we have met up with the guys from the night before so go looking for somewhere to stay as a group. First place is shut so we keep strolling wondering if we’ll all get in to the same place. We do even if a short stroll from the ‘epi-centre’ (it was less than 500m). Good accommodation with elevated huts overlooking a courtyard. Basic but quaint.

Caye Caulker is a very sleepy town on a small island with sandy/dusty streets and as you would expect, extremely laid back. Guys cycling along the roads are barely going fast enough to stay upright. And no cars at all, just the old dilapidated golf cart.

Cheap tasty restaurants and many dive shops setup to take you to the many reefs just offshore. The only downside is lack of a decent beach from which we had been spoiled this past week. However we chill out at a breakfast cafe and head back to accommodation securing hammocks for essential lazing about.

We organise a snorkelling trip for the upcoming days with Sean instead booking a game fishing trip as a different way to get close to the sea life. Later on we head with Sean to one of the bars spruiking happy hours which last much longer than an hour, have dinner and have one of our latest nights for some time, getting in at 9pm.

Head out today for our snorkelling trip. We had Martina and Juli for company. Sean meanwhile went fishing. Really the two main options as far as organised activities on Caye Caulker.

With a reputation as second only to the Great Barrier Reef, I would say having been to the Great Barrier Reef, Caye Caulker blew it away for the amount of sea life. Our snorkel guide Harry showed us tons of stuff. Moray eels, manta rays zooming about, lobsters skulking under rocks, octupuses (or is it octupii?) pulsating along and tons of schools of fish with large forests of seaweed moving about in the waves above the brilliant colours of the coral.

Next stop was a place named shark alley. Named correctly as it was filled with sharks. Nurse sharks which are yes small, yet have teeth. Plus there are hundreds of them! We are invited to swim with them. Having to show my bravado I blindly jumped in and was instantly confronted with about 8 of these nurse sharks. While they took little interest in me, it is the unique movement of a shark which sends a little shiver down your spine. The weaving of their tail being different to a fish of the same size and when they turn towards you it may as well have been a great white! I’m sure the snorkel mask made them seem bigger than they were 😉

Well that was me. Still up on board was my fearless travel companion. Allison, and not surprisingly, another Australian girl, were resisting being shark bait. As I encouraged Allison into the water I checked to see if the coast was clear before she jumped in. While there were no sharks there was a large stingray sleeping just below where she was to jump in! Navigating around this Allison braved the sharks and swam around with them for a good while.

En route back from the reef our guide took the four of us to a calm patch of water on the other side of the island where we saw a tiny seahorse. A very rare sight and it was so small it is a wonder how we or anyone ever saw it or to know it was there in the middle of a large lagoon fed by the sea.

Another day in Caye Caulker. Usual drill. Breakfast homemade on our balcony. Sit under a palm tree to read. Did some chores, get washing done and attempted to do my first VISA cash advance transaction given my ATM card had now expired with no way of receiving a new one whilst on the road. As luck would have it the bank was shut. It was 2pm. Welcome to island time on Caye Caulker.

Happy hour kicks in from 6pm, chicken beans and rice our staple dinner now and had an ice cream as a treat. Only downside was Allison treading fair and square on a large nail and thongs being no match for a solid bit of steel. Not too deep and given we had a decent amount of jabs the risk of tetanus is low, even if the level of pain is still high!

An early return trip to Belize City and a small rain squall hits us half way as we scramble to keep dry under a tarpaulin but it is so warm it hardly seems worth it. We decide to maintain the same itinerary as Sean, Martina and Juli. So neither of us has any set plans other than heading slowly south along a relatively well trodden backpacker ‘gringo’ trail.

Departure from Belize City via a taxi to the bus station to head south to Placencia. The bus is the first of the what are quite common old American school buses. These act as the main form of long distance transport throughout Central America. Where the American school bus goes to die, or more accurately where it goes to be pimped up and driven for eternity. Many buses are painted in loud colours and designs and interiors done out the same, in particular the dash board with many a religious idol present. Plus they all have extremely loud sound systems!

The bus from Belize city ends at Dangriga and we switch to the Placencia bus which is playing reggae versions of Christmas carols. Arrive around 3pm to Placencia with the promise of an amazing beach yet it isn’t a patch on Tulum. It feels this will become the benchmark from which to measure all beaches. Although in fairness it is a relaxing town which we spent hours on a dusty road to get to, so also pretty remote and quiet. 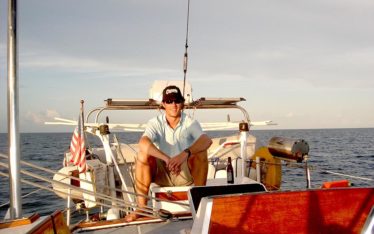 The Windy Dancer
The power in Placencia was intermittent. Being  very hot and humid we noticed quickly when the fans stopped during the night bringing with it uncomfortable heat before the power kicked...
25 Likes
wpDiscuz
0
0
Would love your thoughts, please comment.x
()
x
| Reply