Running to the southernmost point on the Australian mainland seemed like a good incentive. The Wilson’s Promontory National Park also contributed great scenery, including huge granite mountains, open forests, and a rugged and rocky windswept coastline. A lighthouse is the sole man-made structure in this vast National Park. So a solo Wilson’s Promontory trail run to reach the Lighthouse and the simply named South Point was shaping up to be a perfect training run.

I was in training for the Alpine Challenge, a 160km trail run in Victoria’s Alpine National Park. The original plan was to spend a weekend reconnaissance mission in the high country, navigating some of the intended course. As fate would have it a raging bushfire was out of control in the area the same weekend! A quick change of plan had me driving south from Melbourne late one night towards Wilson’s Promontory. I stayed at Promgate Getaway, who provided a cheap and cheerful cabin just outside the Wilson Promontory National Park.

Tidal River is by far the most popular campground within the park, bookings are often needed long in advance. A number of walks to pristine beaches can be had right from the campground. A general store and cafe are also here to stock up on supplies if needed.

I arrived at the Tidal River campground just on sunrise the next morning. A small running backpack was filled with essential supplies for a 40km training run. I then followed the Telegraph Track south. The trail was sandy and rocky but relatively flat and wide enough for a 4WD, yet only National Park vehicles are permitted along it. I only saw one person in the first kilometre but after that, I had 18km of the trail to myself. The area around tidal River is a destination in itself with many pristine bays and beaches to enjoy.

I think I might have surprised the staff member I met when arriving at the light station at 8 am on a Saturday morning. They were a little confused why I had run from Tidal River this same morning! In any case, I took a brief look around the Lightstation precinct which is set high on a granite outcrop with almost 360-degree views of Bass Strait.

The trail to the Wilson’s Promontory Lightstation, is, however, a well-trodden path. Guests staying at the Lightstation must walk in from Tidal River taking all their food and linen with them. With a two night maximum stay it is a short respite before having to hike out again! The Wilson’s Promontory Lightstation’s main purpose is, of course, to support the lighthouse which has been in operation since 1859. It stands 19m above the cliff yet it is another 100m below the cliff to sea-level. Wilsons Promontory Lighthouse, an 18km hike (or run) from Tidal River the only accessible route.

I soon departed the Lightstation, keen not to cool down too much with more than half the run remaining. Backtracking along the Telegraph Trail for 7km, I reached Roaring Meg campground. From here I took a left along a single track towards South Point. It went through thick undergrowth, following a river for a short while. I lost the trail in parts but eventually, just over 3km later, I emerged on the coastline in what was a small peninsula marking the southernmost point of the Australian mainland. Some imaginative soul named this South Point.

For the record, the most southerly point of Australian territory (apart from claimed portions of Antarctica at the South Pole) is the Bishop and Clerk Islets, located way south below Macquarie Island and underneath New Zealand. They simply consist of 3 hectares of bare elevated rock in the Southern Ocean. These islands have only been visited by humans a total of 3 times, and that was supposedly by helicopter! South Point on the mainland was enough for this little weekend adventure. South Point is a long hike to find peace and quiet!

Retracing steps to Tidal River the miles began to take their toll, eventually arriving back to the Tidal River general store for a much-needed fix of whatever food was going! My welcome crew consisted of a brightly coloured Rosella which arrived, I think, mostly to help me finish my lunch. A friendly Rosella looking to help itself to the rest of my lunch. 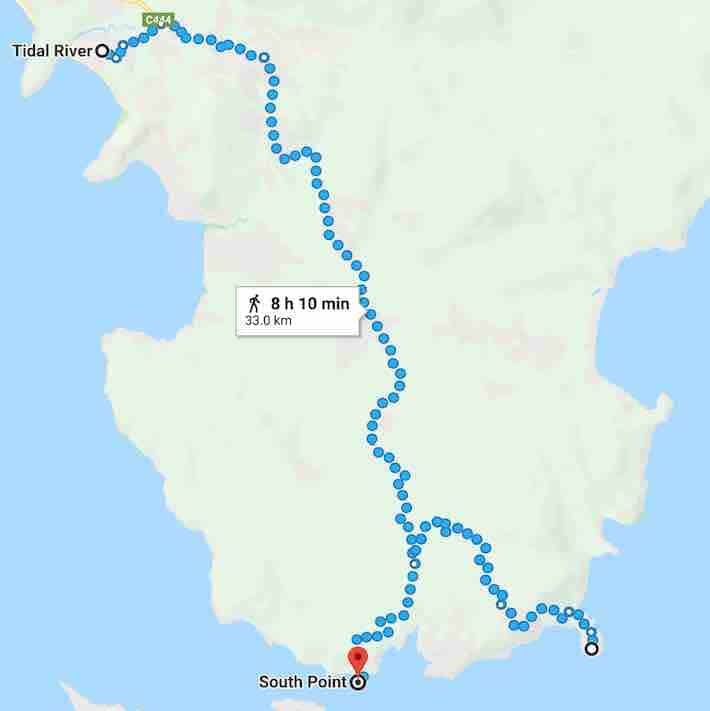 The trail followed. Distance shows 33km, although on my Suunto it measured closer to 39km for the total distance travelled.