Ushuaia, Tierra Del Fuego, Argentina. This is the jumping off point for most trips to Antarctica and also known as ‘Fin Del Mundo’ meaning ‘End of the world’.

It truly lives up to its name and does feel as though it is the edge of the known world. The Beagle Channel leading away from town into the abyss. Named after the ship that accommodated Charles Darwin on most of his adventures.

So with a day to spare after a visit to the southern polar ice cap and a need to stretch the legs after 4 days at sea crossing the tumultuous Drake Passage a run to explore Ushuaia was definitely on the cards.

A unique run if ever there was one. Highlighting the freedom of running. A pair of shoes the price of entry to this most convenient of sports.

The route was from sea level in Ushuaia harbour to the lookout atop St Martien glacier 700m above. A hill climb like no other…

Wearing thermals and a fleece in the crisp 1 degree morning air. The first stage of this king of the mountain climb leads up through town to the steep back blocks of Ushuaia. The neighborhood dogs nipping at my heels helping to keep the cadence up.

Following the well posted signs towards the glacier the houses end followed by a series of switch backs which bring a more impressive view of the Beagle Channel at each turn. Surrounded by steep snow capped mountains, this is an impressive sight!

Eventually reach the end of the bitumen at the ascillar (chairlift). This is where the fun started. Forget Strava points this challenge was simple. Beat the chairlift!

I pick off a distinct looking passenger in an orange ski jacket as he boarded the chair and hit the trail beneath. The trail rose steeply alongside a rushing creek. Keeping an eye on the orange jacket the whole time. While the chairlift was slow I was needing to run the whole way over 2km of steep trail to make sure I met the designated chair at the end. The unsuspecting passenger unaware of the ensuing battle. It’s fair to say it was a tie or counting time to disembark I may have just pipped him at the figurative post.

Caught my breath on the meandering trail leading past the chairlift. I soon spy the destination in the clouds and the trail remaining. It then began to snow heavily as if someone just emptied a load of confetti high above. The flakes so big I actually choke on them while inhaling the next hit of oxygen for tiring legs.

A steep gravel path is thankfully well marked given the real risk of white out. A hop, skip and a jump across the icy glacier keeping an eye out for crevasses. These hidden chasms looking to suck in an unsuspecting tourist.

Now it is a short but steep 500m to the glacier lookout. The last 50m difficult to gain grip on the ever increasing gravel incline.

At last at the top puffing and panting whilst trying to take in the vista below. Not a soul around. The whole trail thus far empty this early. A light snow falling and I peer down through the swiftly moving clouds to the town and extensive channel below.

Can’t stay long at the top before the steam stops rising from my body and the cold seeps in.

It is now a heart in mouth white knuckle descent. The initial gravel trail from the summit quite slippy. Eventually it smooths out to allow a full pace descent. Rock hopping, tundra jumping and generally trying to manouvre at what I was shocked to see later was 19kph! It certainly was a good way to break in my recently purchased Salomon xtrail shoes which performed brilliantly.

The chairlift no match for two feet on the descent. Which continues to the asphalt switchbacks and in to town and finish back at the harbour.

A 16km hit out in just over one and a half hours is definitely a good leg stretch and should sort me out for the long flight home to Australia. Where I will be seeking an equally varied, adventurous and thrilling run that I don’t need to travel to the end of the world for. But I encourage others to! 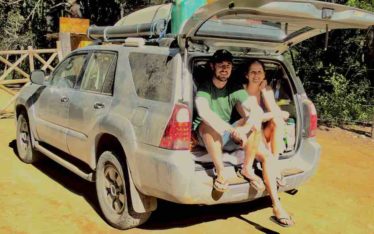 Chile Campervan Adventure
Most epic road trips are booked long in advance, have a detailed itinerary and a list of must do's along the way. So with a week's notice and knowledge of...
94 Likes 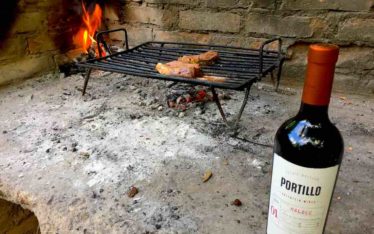 El Chaltén
The custom-built adventure town of El Chaltén . A by-product of the Chilean and Argentinian arms race to secure tourism sites in southern Patagonia. This Argentinian stake in the ground forms immediate...
84 Likes
wpDiscuz
0
0
Would love your thoughts, please comment.x
()
x
| Reply