I had arrived to Antarctica aboard the Icebird, a 60ft sailboat along with eight fellow crew. After crossing the tumultuous Drake Passage we were set to explore this remote, spectacular continent. Between observing the dramatic scenery and unique wildlife there was also mountaineering. Having had little sailing experience and even less in mountaineering I was, you could say, throwing myself in the deepest of ends.

Antarctica has many peaks that simply haven’t been climbed before. Due to the remoteness and the risk. Antarctic peaks all spawn glaciers riddled with bottomless crevasses and are extremely prone to avalanches. Help is also a long way away should something go wrong. My arrival into Paradise Bay was met with wonder, excitement and anxiety laced with anticipation. We were to attempt an ascent up a 1000m, as yet unclimbed, ice chute. From our position aboard the yacht the chute seemed vertical and endless. The summit disappearing into the thunderous clouds.

Climbing began immediately from the shore of the bay. Connected by ropes to my fellow climbers, the technique to the top I learnt involved ‘pitching’. Pitching requires the first climber to scale unassisted before securing an anchor. We then leap frog each other, securing successive anchors as we ascend.

I am now perched with only the toes of my boots holding me to the mountain. Avalanches are thundering down around the bay and it is bitterly cold. Yet I can’t help smiling! Have I gone insane? I could be onboard the yacht with a hot cup of coffee! It is being here committed and completely at the mercy of the elements that brings intense focus. So much so it is liberating. Simply nothing else matters but this exact, precise, moment.

After ten strenuous pitches we emerged on a rounded summit. The yacht barely noticeable far below in between the icebergs littered across the bay. Standing on a peak that no human has yet set foot on was certainly a unique event. Although compared with the euphoria of the ascent it was actually an anti-climax.

I had long since ran out of superlatives to describe Antarctica. This climb and the opportunity to explore the bottom of the world will just be etched in my memory forever. Now, how do we get down exactly? 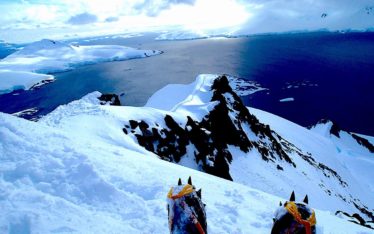 Port Lockroy, Antarctica
The UK Antarctic Heritage Trust staffs the most southern post office in the world located at Port Lockroy on the Antarctic Peninsula. This remote outpost attracts a resilient crew over the...
70 Likes 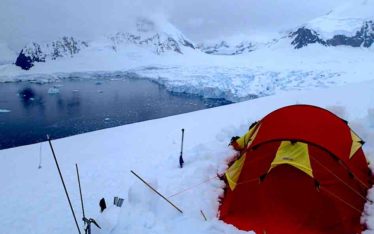